The dog breeds that we have today were all developed, over time, by Humans.  Each “new” breed was a combination of “other” breeds to come up with a unique looking and uniquely skilled dog.  What I am doing is no different than those that have passed before me.  Except that I have the luxery of modern day health testing to aide in developing my strains/breeds. 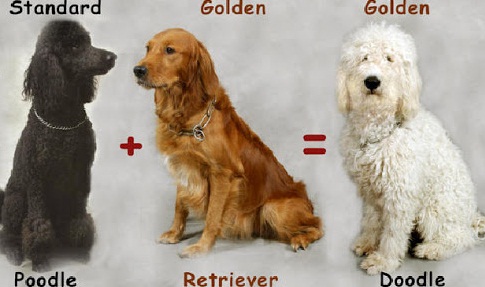 In as much as new breeds have been developed, so have many dog breeds become extinct.  My personal belief is that many of today’s dog breeds need extreme modification due to the fact that their inherent instincts are obsolete, at least to the modern day urban family.  Meaning, most modern day households don’t need a dog to pull a sled or cart, guard a flock of sheep against wolves, help hunt wild boar so food can be put on the table, keep barns and stables rat free. . Here are descriptions of the origins of some dog breeds that you might be familiar with:

Golden Retrievers were “developed” in Britain during the 1800’s.  Believed to be included in the formation of the Golden Retriever breed are the now extinct Tweed Water Spaniel, the Newfoundland, the Irish Setter and a variety of water spaniels.  They wished to develop a dog which was loyal and kind, yet spirited and energetic, with a love for the water and an ability to retrieve.

The Rottweiler has an ancestry that goes all the way back to the ancient Roman times of the Roman drover, a Mastiff type dog. The drovers were used to herd cattle during the day while the army was traveling, and at night while the soldiers slept it protected the troops from surprise enemy attacks.  In Rottweil, Germany, the breed emerged as the butcher’s dog. It proved indispensible to the butcher–it herded the cattle, pulled the meat cart, and held the butcher’s money purse.

The Yorkshire Terrier originated from Yorkshire, the North of England. The Yorkshire Terrier’s history started in the middle of the 19th century. The onset of the Industrial Revolution being in England in that time, many former agricultural workers came to Yorkshire to seek work at coal mines, textile mills and factories. Some of them brought their dogs – various types of terriers of that time to catch rats. The crosses between those dogs produced the original Yorkie.

Boxers – During the middle ages in England, this basic stock developed into three principle types. In Germany one type was know as the Bullenbeisser (bull-biter). The Bullenbeisser was the only hunting dog in Germany. The small Bullenbeisser or Bradanter was bred and trained to hold in check the bull and to obtain a grip on the nose that he held tight. Until bull biting was outlawed in the 19th century, the Boxer, as well as other breeds, was used for this purpose.

Dachshunds were developed by German foresters to hunt badgers. The Dachshund gets its name from the German word ‘dachs’ meaning badger and ‘hund’ meaning dog. The exact origins of the breed are unclear but it is probably involved the Basset Hound and some terrier blood.

The Boston Terrier breed originated around 1870 in the USA in Boston.  The originator had a stud male that was a cross between an English Bulldog and an English White Terrier.  This dog was bred to smaller dogs and then the subsequent offspring were crossed with French Bulldogs.

Pups $500 and under
Reservation List Information
Payment Info
Pups $1,000 and up